Thoughts on the artworks picked by Dr. Jill Biden on the occasion of Joe Biden’s inauguration as President of the United States of America 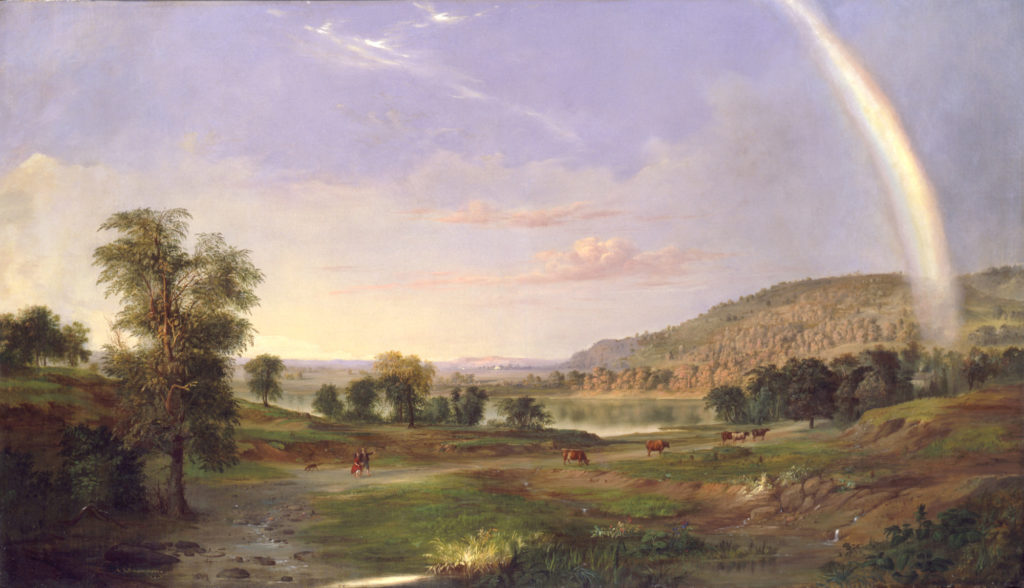 “There is in the human mind an almost inseparable connection between the beautiful and the good, so that if we contemplate the one the other seems present; (…) it is difficult to look at any objects with pleasure (…) without feeling that disposition of mind which tends towards kindness and benevolence; and surely, whatever creates such a disposition, by increasing our pleasures and enjoyments, cannot be too much cultivated.”

Biding by the tradition to present a painting that is usually picked by the Chairman, Dr. Jill Biden personally chose this artwork by Robert S. Duncanson in honor of today’s historic inauguration of her husband, Joseph Robinette Biden Jr., as the 46th president of the United States of America. Her choice could not have been more considerate and is of great symbolic importance.

Robert Seldon Duncanson (1821 – 1872) was a self-taught Cincinnati-based American painter and one of the best known African-American artists in the years around the Civil War. 2021 marks the bicentenary of his birth in Fayette, New York.

Starting out as a housepainter in Michigan, he first studied fine art in his freetime and eventually made the decision to move to Cincinnati, known at the time for its vital art scene. While in Ohio, Duncanson got acquainted with members of the second generation of artists of the Hudson River School of Art, the first national American school of art, founded by Thomas Cole in the Catskill Mountains of New York in the 1820s. Influenced by Romanticism, the Hudson River School searched for truly unique, defining features of the vast American continent and the young nation of the United States. In contrast to the landscapes of Europe, history laden and “hallowed (…) by the footsteps” of great men, they found them in America’s untamed wildness, its overflowing richness of natural wonders, its dramatic vistas and its pastoral sceneries. Beauty, magnificence and sublimity with “peace, security, and happiness” as “the spirits of the scene”.

Once he received a commission from an anti-slavery activist, Duncanson was able to put himself on the map of the most influential artists of his time. Throughout his life he upheld relationships with abolitionists and other people who wanted to support African-American artists.

In step with his times, Duncanson went on a grand tour of Europe, where he studied the Old Masters, which had a lasting influence on his oeuvre. While in Britain, he met Alfred Lord Tennyson, poet laureate to Queen Victoria, who said of Duncanson’s works: “Your landscape is a land in which one loves to wander and linger.”

Duncanson’s art gained recognition both in the United States and abroad. After the artist’s death in 1872, he shared the fate of many artists who had been very popular in their lifetime but fell into obscurity soon after. An exhibition of his paintings in 1972 was a first step to restore his name to its rightful place within art history.

Duncanson’s “Landscape with Rainbow” evokes the sense of an ideal pastoral American landscape, a bucolic utopia of peace and serenity. In it, he presents an idyllic scene of rural nature, a paradise of gently undulating hills and verdant fields. Amid this arcadian scenery, a young couple – maybe a shepherd and his companion – along with their dog are shown leading cattle home toward a white house, a home in the meadow hidden among a group of dark trees at the far right of the painting.

Yet, people and cattle in the middle ground take a backseat to the scenery, a mountain range drenched in soft pastels and the “silver haze” of sfumato greens cast like “a veil of tender beauty” over the landscape. Overarching the scene is a monumental rainbow that links the heavens above with the earth, the little white house forming the much sought after end of the rainbow, where a mythical pot of gold is said to be hidden.

Created in the years leading up to the American Civil War, Duncanson’s painting omits any hints of political unrest. Instead, he creates an image that oozes hope for peace symbolized by a picturesque landscape after “the dark tumult of the storm” has passed. A scene of a world renewed, hopeful and full of possibilities. There are no more storm clouds, no longer a looming dimness in Duncanson’s artistic vision. Duncanson’s imagery brings about a “calm religious tone (that) steals through (our) mind” in an “oasis that yet remains to us”.

Dr. Biden’s choice can be read in many ways: As an effort to raise awareness for a long forgotten, but truly outstanding, trailblazing African-American artist, who was a part of the higher echelon of the society of his time. As a nod toward a largely forgotten African-American history of art. As a hint that “nature is still predominant” and our highest good, worthy of being preserved for those that come after us. But most importantly at this time, it is a hopeful symbol for her husband’s presidency which starts today.

Not knowing what her intentions were, this marvelous work by Robert Seldon Duncanson reminds us that the liberal arts “carry with them the power to mend our hearts”. Considering where we are currently at in the art world during these challenging times, I also want to see her choice as a symbol that the arts are “conducive to our happiness and well-being”.

“We are still in Eden; the wall that shuts us out of the garden is our own ignorance and folly.”